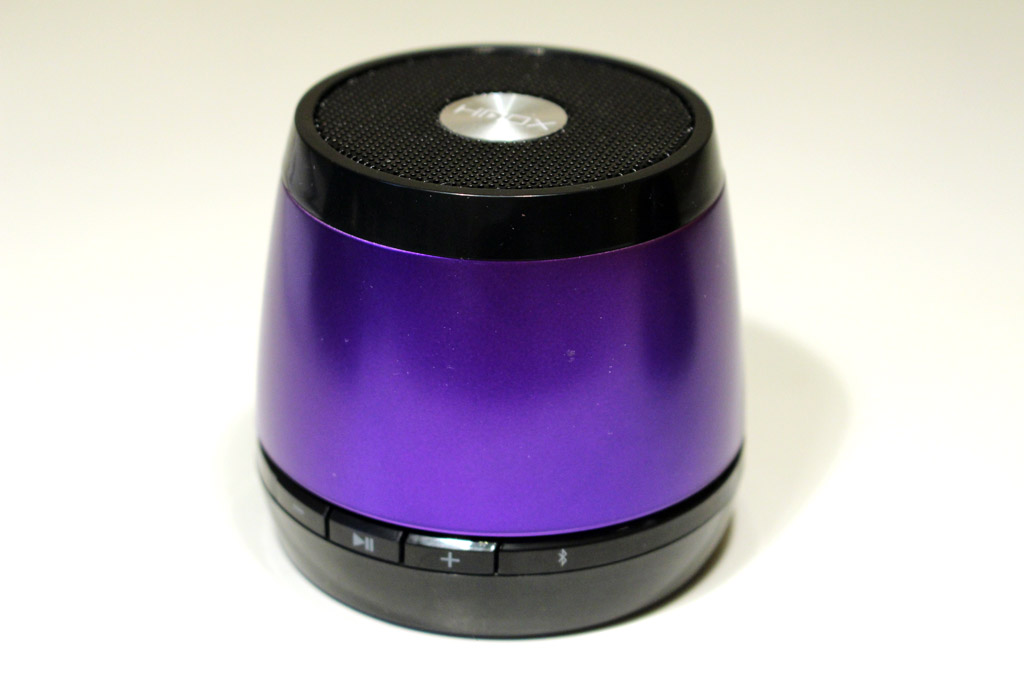 I recently attended a preview event showcasing some new products from Homedics – a company who also make the well known Salter range of kitchen gadgets. What I didn’t know is that they also make this “HMDX” range of audio products, and I was lucky enough to be given one of these little HMDX Jam Bluetooth speakers to play with.

This is a mono Bluetooth speaker with a rather cute design. Even the packaging is clever, with everything being contained in a “jam jar”. They come in a variety of colours, but I think this purple one is particularly fetching.

Connecting the speaker is simplicity itself. Just flick the switch on the bottom, pair it with your Android or IOS device and you’re good to go. For those with non-Bluetooth audio compatible devices, there’s a simple 3.5mm line in socket along with a short cable. There’s also a standard micro-USB cable included for charging.

I tried the device with my HTC One and it worked as expected. There’s a range of about 10 meters, so I could keep the phone in my pocket and wander around the room without any disconnection.

Having got used to the HTC One’s fantastic sound quality though, I was struck by the fact that my phone’s internal speakers actually sounded a lot better than the Jam. There’s a good volume to this little speaker, but it’s missing a lot of the high and low end, so consequently sounds a little muffled.

But it is significantly better quality than the speakers in some of my other devices. It worked great with my Nexus 7 and Acer Iconia A1 and offered a noticeable improvement over the built in speakers.

Overall, it may not be the greatest sound quality in the world, but it’s cute, well constructed, and gets the job done.

Would I buy this? For £25 (Amazon Link), I’d certainly consider it as a kitchen speaker for a tablet, but I think I’d be tempted to spend a little more to get the slightly better spec’d HMDX Jam Plus model which allows two speakers to be paired as left/right stereo.