I love Apple products, but lately they’re just not coming through for me in quite the same way they used to. Take the new MacBook Air, announced yesterday. 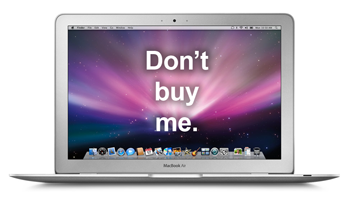 As you can see, it looks fantastic. But unfortunately, Apple have seriously compromised on functionality – and more bafflingly, they’ve done it for no apparent reason. The only benefit of the MacBook Air is that it’s a bit thinner than a standard MacBook.

I have a simple question: Why?

For those of us looking for an ultraportable, ‘thinness’ is not one of the requirements that comes high on the list. The other dimensions are far more important! I want to be able to slip a laptop easily into pretty much any bag and go. I don’t care how pretty it looks or that people will say “Ooooh” and “Aaaaah” when I take it out. I just want to get stuff done on the go.

Here’s some more of the MacBook Air’s shortcomings:

Unfortunately, the MacBook Air is a case of Apple taking it’s current “form over function” philosophy way too far. It’s over priced, under spec’d and will almost certainly snap in half if you sit on it.

A genuinely small sub-notebook seems to be beyond Apple’s capability right now – despite the fact that they’re already more than half way there with the iPhone. Sigh.

4 thoughts on “MacBook Air: One to avoid”