…but will succeed anyway

[Note: Before you comment on this, please note that it was written in March 2007. Twitter has changed, and so have I.] 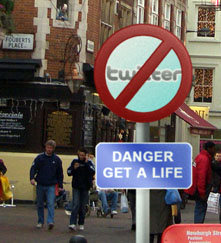 If you haven’t heard of twitter then you’ve either been living on another planet for the past few months, or you’re the kind of person that has a life.Unfortunately, I’m neither of the above.

Twitter describes itself as “a community of friends and strangers from around the world sending updates about moments in their lives”, but really the best description is a “micro-blogging” site.

You see, unlike a typical blog, twitter wants to know “What are you doing?” 24 hours a day. You have a text box with 140 characters, and the idea is that you give a running commentary of every moment of your life.All messages you send automatically appear on all your “friends'” pages, and all their messages appear on yours. Horrifying, isn’t it?

But it gets worse. The thing that makes twitter stand out is that all messages can be sent and received via your favourite instant messenger.. or on your mobile phone. So what you end up with is a service that’s half way between a blog and a “group instant messenger”.

So why is this so bad?

Well it’s partly down to the kind of people that are using the service. You see, twitter is very popular with the geek community on the West Coast, and has kind of spread out from there. So what you see on the site is a combination of techie messages, dot-com-geek-wannabes trying to get noticed and a whole load of stuff that’s so mundane it just makes you wonder why you didn’t spend the last ten minutes doing something constructive instead – like maybe shooting yourself in the head.

Call me old fashioned, but I really have no interest in the fact that Leo Laporte is eating his lunch, Cali Lewis is drinking a coffee with Splenda Flavor Blends, or even whose couch Kevin Rose happens to be trowing up on today.

You see, unless all your friends are on twitter the noise-to-signal ratio on the site is enough to make you want to go out and pull the legs of kittens to relieve the boredom.

And that’s why twitter will succeed.Because it only works if all your friends are on it, the only way to have any real fun is to invite them all. Then you can be the one inflicting the tedium on others! Yay!Now this ‘model’ has been used before – and what we ended up with was MySpace. The largest and most pointless thing ever created in the history of humanity. And now twitter is going the same way.

For the casual observer though, there’s something a little odd about twitter’s business model. You see, they don’t have any ads – and they let you send and receive updates via text message for free. So how dow they expect to make money, let alone stay in business?Simple. Once they reach a critical mass, they’ll start charging for sending text messages. Already, a lot of users are using their phones so they can “stay in touch” while out and about. Many of them are finding they can’t live without twitter on their phone. (Yes, they are sad, sad people.)

But imagine twitterers are sending a million messages a day between them (which is easily achievable) and only 5% of those are sent from a phone. Now imagine twitter makes 50 cents from each of those messages. That’s $25,000 a day or $9,125,000 a year in revenue without even trying, with very little required in the name of network resources and a site so basic it hurts just to think about it.

What I’d really like to see is a twitter competitor with more functionality and a clearer delineation between real friends and people think they’re cool and somehow get off on telling the whole world every time they go to the toilet. Unfortunately, it may already be too late…

(Oh, and my twitter username is domr – add me and feel my contempt.)