Last week I bought myself a Prada phone as a birthday present, and as it’s a bit different I thought I’d do a little review.

The Prada phone has been compared to Apple’s iPhone by many – primarily because of its large, buttonless touch screen but also because of the stylish interface.

Parts of this phone are simply gorgeous and parts of it are stupidly annoying. The touchscreen interface takes a few days getting used to, but I don’t think I’d want to go back to a phone with buttons now. The entire interface is written in Flash and is simple and clean with nice little animations.

Typing texts is a bit difficult and emails aren’t worth bothering with – the on-screen keyboard simply replicates a standard phone keypad with [1abc] [2def] type keys. I’m sure they could have found a way to fit a QWERTY style keypad on the screen if they wanted to.The web browser is crap. I’ve installed Opera Mini on mine, which is much better although still a bit difficult to control with on-screen buttons overlaid on the screen. 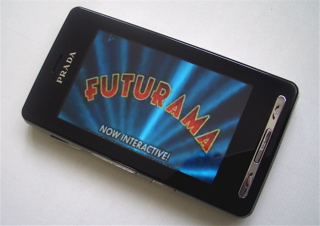 The MP3 and video players are fairly decent. Video playback looks pretty damn good at full screen and the player allows you to stretch or zoom video to fill the screen. The MP3 player is one of the nicest I’ve seen on a phone and the speaker is loud enough to listen to music without headphones. It takes Micro SD cards, and you can get a 2Gb card for £10 these days, so it’s probably a viable alternative to an iPod Nano. Although I have found there seems to be an audible ‘click’ between tracks.

Why phone manufacturers can’t just put a standard 3.5mm jack on phones is beyond me. Half modern phones are sold partly as personal media players these days, but it’s still a lot of hassle to actually use them as one.Speaking of hassle, the sync software that comes with the phone is supplied on a mini (8cm) CD and does not appear to be available for download anywhere. For me, that renders it completely useless. All the drives in all my computers are slot-load drives which can’t take 8cm CDs. How difficult would it be to include a full sized CD – or even to include the software on the memory card that comes with the phone. If you plug the phone into a USB port, it’s instantly recognised as a mass storage device anyway.

The (2 megapixel) camera is fairly average, but I’ve not played with it much. I don’t expect it will ever produce great results, given the lens (and the rest of the phone) are always covered with fingerprints.Battery life sucks somewhat. No more than a few hours MP3 playback and an absolute maximum of 3 days on standby. My old Windows Mobile phone managed 8-10 days between charges.

The build quality is just baffling. It has a gorgeous screen with a completely stupid chrome-effect plastic trip around the edge that just feels cheap. Oh, and a fiddly little plastic ‘door’ covering the power socket which I know is going to break off at some point.

But it’s still the nicest phone I’ve ever had and I’m glad I bought it and that’s mainly down to the touch screen interface. It just feels a bit like they rushed it out just to get to market before the iPhone. With a little bit more attention to detail it could have been an amazing phone.