A lot’s been said in the last ten day’s about Apple’s new AppleTV. Most of the talk is based on the fact that this little box was comprehensively hacked to pieces – in a good way! – within a week of being released.First someone managed to upgrade the hard drive, then it was hacked to play Xvid videos, run normal Max OSX applications (including Firefox and World of Warcraft!), and then someone managed to get the front-end working on a MacBook.

I decided to see what the fuss was about. So, I present…. 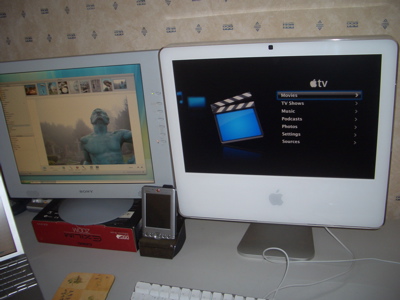 And I’m actually pleasantly surprised. It’s infinitely more responsive than FrontRow when streaming media from my Mac Mini over 802.11g. I’m even running Windows XP via Parallels, Photoshop and iPhoto in the background.

The only annoyance is there’s no way to quit the application currently, so I’m having to kill it via SSH.I really hope that the Leopard version of FrontRow works as well as this, because at the current version is definitely NOT designed for streaming video over the network.